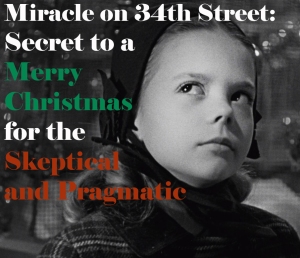 Miracle on 34th Street has been one of my favorite Christmas movies for as far back as I can remember, but only recently did I really figure out why. We’re talking about the  black & white 1947 version here, not colorized, not remade, just perfect as it is.

My  English teacher Mrs. Thea Kreis used to say that every great Christmas story since A Christmas Carol has been the story of a character transformation. Miracle on 34th Street gets this right in an amazing way, but you have to look closely at he conflicts and motivations to see why it is so awesome.

Characters take up the banner of Christmas not because it’s the magical  thing to do, but because it is the most practical and sensible thing to do.

Macy’s and Gimble’s both embrace a revolutionary customer service approach not because they are attuned to the Christmas spirit, but because it makes the most sense from a business standpoint to help the customer as much as possible.

The judge doesn’t want to back out of his duties, nor does he want to present a ruling either untruthful or unkind; pinned between a rock and a hard place, and he resolves to keep “an open mind” and try to find a solution.

Mr. Macy doesn’t want the headlines to show he denies the existence of Santa, that would disappoint the young customers and their parents, so he supports Kris with his testimony.

The DA doesn’t want to tell his son that he wasn’t telling the truth, so in the famous line,  “New York concedes the existence of Santa Claus,” and gives a huge win to Kris’s defense.

Post Office workers, inspired by Susie’s letter to Santa, come up with a way to get rid of all those dead letters in storage and wind up actually saving Christmas.

Real conflicts are brought on by people clinging to out-of-date, erroneous or unhelpful mindsets that don’t make them happy.

Mrs. Walker is painted as a woman who doesn’t want to believe in “lovely intangibles” after being hurt.(I won’t comment on divorce in the movie because I don’t think it’s as important to the plot as the other themes – though the divorce stuff is iffy and dated, it’s not the point here.) Therefore she doesn’t allow room for growth in that area and clamps down the lid on fantasies and fairy tales for her and her child.

Susie believes that the other children play “silly games” and use their imaginations, something she believes is either pointless or ridiculous. Kris turns this around for her by teaching her what imagination really is, and how much fun it can be.

Mr. Sawyer, the villain of the story if there is one, is a nervous wreck who constantly emphasizes how right and important he is, and needs to wield as much power over others as possible (though he has a very, very small amount) for the sake of nothing more than being “right.”

Even Kris, however briefly, decides that he doesn’t want to be a part of the world anymore because he believes that people like Mr. Sawyer are the “normal” ones and there’s no place for him in the world. 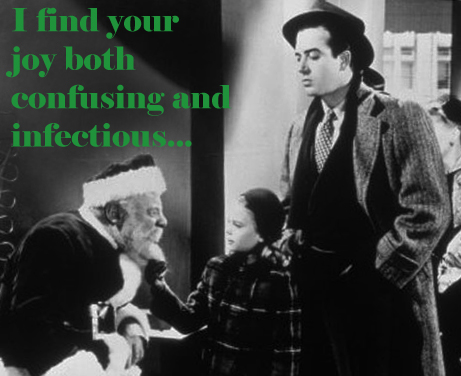 When these characters begin to let go, they begin to feel joy and embrace things they were afraid of – things that genuinely do make them happy.

Well… all except Sawyer. He gives us an example of what happens when you continue to cling to power and beliefs that aren’t helpful and both ignore the big picture and the possibility that you might be wrong.

The happiest people are the ones who see the good in others, analyze their lives in an easy-going way, and opt for the kindest, most practical approach to life.

All Alfred the janitor did was be kind and chat with Kris about how much he enjoyed kindness, and by the end he’s on first-name basis with Mr. Macy.

Mr. Gaily took in Kris to help make Mrs. Walker and Susie happy. He defends Kris and starts his own practice because he knows that ultimately it’s the best way to make him and everyone around him happy. He knows who he’ll be helping and that he’ll enjoy it  “Oh — probably a lot of people like Kris who are being pushed around. That’s the only fun in law, anyway.”

All Kris’s doctor did was share information about Kris’s mental state, and help assess the best options for him. He got the brand-new X-ray machine he needed. Why did he get it? Because Gimble and Macy joined forces behind the best customer service policy they could find, and rewarded Kris for giving it to them. Why did Kris give it to them? Because it was the best way to make the children happy.

It’s an epic causal loop of kindness and giving, not because it’s December 25 or because the people are instructed on how to behave for the holidays. It’s not about just Christmas, it’s about kindness and making people happy.

But wait, aren’t Christmas movies about embracing faith because it’s the right thing to do, and not thinking about practicality? Aren’t we supposed to see Mrs. Walker and Susie turn their backs on practicality and embrace faith?

THIS IS WHY THIS MOVIE IS SO BRILLIANT.

It isn’t truly practicality and sensible behavior Mrs. Walker and Susie start out with – it’s unhelpful beliefs about life, and resistance to exploring things that could make them and their world better.

The happiest characters – Kris, Fred Gaily, and Alfred – are the ones who are most sensible and kindest to others. They reason well, they listen to others, and they genuinely love and try to help the people around them.

The movie isn’t about being silly or frivolous or giving because it’s Christmas. This movie is about practically assessing what makes you happiest and what makes the people around you happiest, and sharing that with the world. It’s about letting go of mentalities that keep you alone and make you sad. It’s about paying attention and being creative with opportunities.